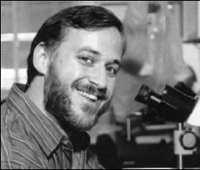 Many species of bacteria swim by means of flagella, helical propellers driven by rotary motors in the cell membrane. The flagellar rotary motors can turn at 100,000 rpm or faster, obtaining energy from the membrane ion gradient. The motors can turn either clockwise or counterclockwise, and by controlling the direction of motor rotation in response to environmental cues, cells can move toward nutrients or other environmental factors that favor their survival. Flagellar motility has a role in the virulence of many bacterial pathogens and serves as a model for the many biological energy conversions that occur at membranes. Our goal is to understand the structure and molecular mechanism of the flagellar motor.

While more than 50 proteins altogether are needed for assembly and operation of a flagellum only a few are directly involved in rotation and switching. With our collaborators we have solved structures for most proteins that function in rotation and have arrived at a working model for the rotor. Future work will focus on using this structural framework to understand rotation and switching, and extending it to include the stator (non-rotating) pieces.

During flagellar assembly, the protein subunits that form the exterior structures are actively transported to their destinations by a specific protein-secretion apparatus at the base of the flagellum. This process is closely related to the export that occurs in the 'injectisome' that is used by many pathogenic species to deliver virulence factors into host cells. We have shown that this export process is energized by the membrane ion gradient rather than by ATP hydrolysis, and have determined the minimum set of proteins sufficient for the export to occur. Future work will be aimed at understanding the molecular mechanism of protein export by the flagellum and the injectisome.

A. Electron microscopic reconstruction of the flagellar basal body, from DeRosier and coworkers (J. Bacteriol. 188, 7039-48). The structure is viewed from the side. The bottom-most feature, termed the C-ring, is in the cytosol. A working hypothesis for the locations of the FliG, FliM and FliN proteins is shown at the right of the C-ring.
B. Detail showing rings of density at the bottom of the C-ring.
C. The appearance of the bottom of the C-ring as determined by EM, and the organization of FliN and FliM proteins deduced from cross-linking and mutational studies.