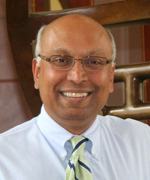 The major long-term goal of our research studies is to understand the mechanisms by which human cancer-causing herpesviruses interact with the host cell. We study Epstein-Barr virus (EBV) and Kaposi's sarcoma-associated virus (KSHV). EBV has been identified as a cause of Burkitt's lymphoma, Hodgkin's lymphoma, lymphomas in transplant recipients, gastric cancer and nasopharyngeal carcinoma. KSHV causes lymphoma in addition to Kaposi's sarcoma, a malignancy of the blood vessels. Both of these viruses maintain latent infections in their human host but intermittently lead to uncontrolled cellular proliferation that results in cancer. We apply molecular techniques to identify how specific viral gene products modulate cell functions. We introduce targeted genetic changes into the viral DNA, altering or deleting the gene of interest.  We developed techniques which allowed the generation of viable EBV viruses (genetic recombinants) that could be used to determine the role of virtually any EBV gene. We have applied these and other methods to study a unique EBV gene, known as the SM gene, that regulates not only EBV genes, but also those of the host cell. The SM protein acts by pirating components of the host cell to facilitate expression of EBV genes and also modulates host gene expression. This work is currently supported by NIH RO1 funding from the National Cancer Institute and we have been consistently funded by the NIH in the field of gammaherpesvirus research for over 25 years. Our most recent research accomplishments include the following:

Our current research agenda consists of further discovery of the molecular interactions between EBV and KSHV and the host cell. Specifically, we are performing experiments to determine exactly how these RNA binding proteins recognize their target messenger RNAs. By defining the structure and sequence of the target, we will be able to fully understand how the virus modulates cellular gene expression.

The third major area of investigation is to discover exactly how CTCF and cohesin inhibit EBV and KSHV replication; whether they prevent DNA replication by topologically interfering with the process of replication and/or by inhibiting viral RNA transcription.  We are using a variety of molecular techniques to explore the regulation of this process and cells from patients with mutations in the cohesin pathway.

We have now launched a drug discovery component to our studies where we are identifying compounds with antiviral activity based on their ability to target the SM protein or its homologs in other herpesviruses. This will allow not only therapeutic drug development but also allow us to probe the mechanism of action of SM and its homologs.