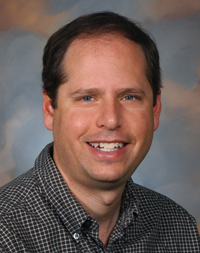 During development of the central nervous system (CNS), cells are influenced by their environment to adopt specific fates. These environmental signals are crucial for the correct patterning of cell types and their subsequent functional connections. My laboratory is studying the role of the Wnt/β-catenin signaling pathway in CNS cell fate specification. We use zebrafish as a model organism, focusing on the regulation of Wnt/β-catenin target genes in the CNS by a family of transcription factors called Tcf proteins. Tcfs are required for β-catenin to regulate transcription, and can act as repressors or activators of target genes depending on the state of Wnt signaling.

We are interested in the functions of Wnt signaling in zebrafish spinal cord development and regeneration. We have shown that following transection of the larval spinal cord, Wnt signaling is required for radial glia to generate new neurons. One current project in the lab is determining the mechanism downstream of Wnt signaling that mediates neurogenesis following injury. This function may be critical for stem cell-mediated regeneration. A second project is investigating whether new neurons integrate into functional circuitry, and whether they are required for the recovery of sensory and motor behavior. 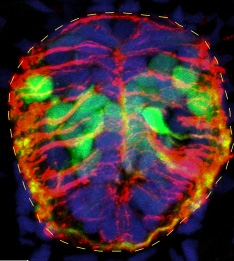 This work focuses on the role of Wnt signaling and its transcriptional mediator Lef1 in the differentiation of neural progenitors in the posterior hypothalamus. This region of the brain maintains Wnt activity and continues to produce neurons throughout life, suggesting that Wnt-regulated neurogenesis plays an important role in the adult brain. We have found an evolutionarily conserved requirement for Lef1 in mediating anxiety, and in the formation of anxiolytic hypothalamic neurons. We have also identified Lef1 target genes in the zebrafish and mouse hypothalamus, and are determining their functions in neurogenesis and behavior. Other work is focused on testing the requirement for postembryonic neurogenesis in modulating anxiety. 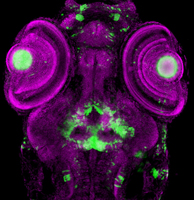