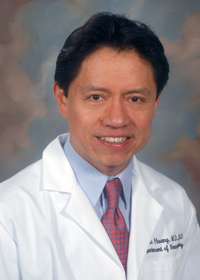 The Huang Lab focuses on identifying underlying mechanisms of glioma progression with the goal of providing novel therapeutic targets for glioma patients. Malignant gliomas arise from glial cells of origin and represent 81% of primary brain malignancy and cause significant mortality and morbidity. Glioblastoma—World Health Organization (WHO) grade IV, the most common and advanced form of glioma—has a 5-year survival of only 5.5%, whereas recurrence and progression of WHO grade II and grade III (lower-grade) gliomas contribute disproportionately to high mortality and morbidity. Despite an all-out effort with surgical resection, radiotherapy, and chemotherapy, the mortality rates of malignant glioma remain unchanged for the last four decades.

The cytosolic isocitrate dehydrogenase 1 gene (IDH1) catalyzes the conversion of isocitrate and NADP+ to 2-oxoglutarate and NADPH. Somatic heterozygous IDH1 mutations occur in >70% of the lower-grade gliomas and secondary glioblastomas, substituting arginine 132 with histidine at a frequency of 92% among gliomas with the mutation. The mutant enzyme requires the remaining allele of wild-type IDH1 for the conversion of 2-oxoglutarate and NADPH to D-2-hydroxyglutarate (D-2HG), a potent inhibitor of 2-oxoglutarate-dependent histone demethylases and the TET family of 5-methylcytosine hydroxylases. Consequently, IDH-mutant gliomas exhibit a CpG island methylator phenotype resulting from histone and DNA hypermethylation. Although IDH1 mutation is believed to drive gliomagenesis via D-2HG mediated epigenetic alterations, the median overall survival of glioma patients with IDH1 mutations is 2—3 times longer than those without mutation. Nevertheless, patients with IDH1 mutations still succumb to the malignancy despite the association with improved outcome. It is also noteworthy that IDH1 mutations are rare or non-existent in other type of brain tumors, let alone outside the central nervous system.

We have proposed a contrarian hypothesis that heterozygous IDH1 mutation is intrinsically tumor suppressive and beneficial to the patient through a series of studies; however, this theory seems unfathomable because how on earth hotspot mutations in cancer are tumor suppressive and genetically preserved throughout glioma progression. Our further studies have demonstrated that the tumor-suppressive activity of IDH1 mutation is in fact undermined by various intracellular and extracellular factors, notably the neurotransmitter glutamate—abundant in the frontal lobe—as well as the inactivation of tumor-suppressor genes, selection against IDH1 heterozygosity, and reducing equivalents. Therefore, this dynamic hypothesis not only provides an explanation for the genetic preservation of IDH1 mutations throughout glioma development and progression but also accounts for the prevalence of IDH1 mutations specifically in glioma and the beneficial effect to these patients. Importantly, these studies are guiding us to explore novel therapeutic targets for patients.

Metabolic reprogramming is an adaptive response critical for the survival and proliferation of cancer cells through the reduction of glucose oxidation (the Warburg effect) and diversion of glycolytic metabolites for the synthesis of macromolecules. The mitochondrial pyruvate carrier (MPC) protein complex, consisting of MPC1 and MPC2, is essential for pyruvate transport into mitochondria. In most human cancers, MPC1 is frequently deleted or down-regulated and, furthermore, the MPC activity is low, which is consistent with the concept of Warburg effect. The role of MPC in malignant glioma, however, seems more complex, as indicated by our bioinformatics analysis of patient data and experimental data. We hypothesize the cerebral cortex provides a unique microenvironment for tumor cell survival and we are actively testing this hypothesis in order to identify metabolic vulnerabilities of glioma cells that can be used for therapeutic intervention.

Previous studies from my lab and others have indicated a critical role for hypoxia (low oxygen tension) in malignant progression. We first demonstrated in cell culture models that the hypoxia-inducible factor 1α (HIF-1α), a master regulator of oxygen homeostasis, induces genetic alterations by inhibiting DNA repair. At the molecular level, we identified a novel mechanism that accounts for the hypoxic suppression of DNA repair via the Myc pathway. To demonstrate in vivo effects of HIF-1α on genetic alteration, we are employing mouse genetic models to test our hypothesis that HIF-1α drives glioma progression by inducing genetic alteration.