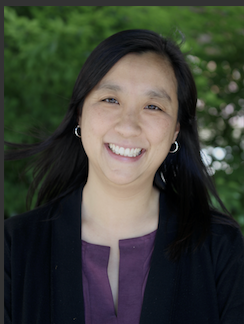 My lab studies the cellular and molecular mechanisms underlying tissue morphogenesis: the process by which a group of cells achieves its proper cellular organization and shape. Using the vertebrate eye as a model, we want to understand how the cells that comprise the vertebrate optic cup – neural retina, retinal pigmented epithelium, and lens – form the stereotyped structure that is critical for visual function. Developmental defects in eye morphogenesis represent a common cause of serious visual impairment in newborns.

Using confocal microscopy and a custom-built software suite for tracking cell behaviors in four dimensions, we have previously generated a map encompassing all cellular movements and divisions during zebrafish optic cup morphogenesis (Figure 1). We found that a complex set of cell movements, coordinated between different tissues, is responsible for shaping the eye. Using this unprecedented dataset as a reference point, our current studies focus on the molecular mechanisms underlying eye morphogenesis. Our studies make use of zebrafish molecular genetics, cell biology, and live imaging, and include the following projects:

We found that the extracellular matrix component laminin is required for eye morphogenesis: in bashfulUW1 (laminin-α1) mutants, optic stalk constriction and optic vesicle invagination are impaired (Figure 2). In addition, establishment of apicobasal polarity is impaired. However, we still do not understand how disrupted polarity leads to this phenotype, how polarity is initially established, or the signaling pathway downstream of laminin.

While signaling pathways such as Shh and Wnt are known to play a role in patterning the optic vesicle, their role in morphogenesis itself is unknown. By performing 4-dimensional cell tracking on zebrafish mutants and morphants, we will quantitatively determine the contributions of different developmental signaling pathways to eye morphogenesis.

During eye morphogenesis, we find that retinal progenitors have unexpectedly motile behaviors despite their epithelial polarization. Such behaviors are frequently regulated by Rho-family small GTPases, and we will investigate the involvement of these signaling molecules in coordinating the motility of single cells and the morphogenesis of entire sheets if tissue.

Our 4D analysis suggests that coordination of cell movements between tissues is critical for eye morphogenesis. In addition, in a forward genetic screen, I isolated a mutant, O15, in which extremely tight adhesion between the optic vesicle and the overlying ectoderm impairs invagination of both the optic vesicle and lens (Figure 2). We are isolating the underlying mutation and will determine the nature of the tissue-tissue interactions regulated by O15. 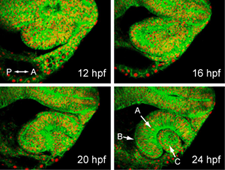