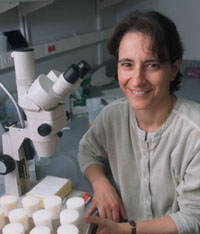 In the high degree of conservation of fundamental biological processes in humans and flies, coupled with the broad repertoire of fly genetic approaches makes Drosophila a uniquely powerful system for modeling human development and disease. In my lab we consider both embryonic and adult stages of development- using the fly to gain insights into human developmental abnormalities and disease, including neural tube defects such as spina bifida and neurodegenerative disorders such as Adrenoleukodystrophy.

We have employed genetic methods to identify, clone, and characterize genes required for dorsal closure, the morphogenetic process by which the embryonic lateral epidermal sheets spread dorsally to encase the developing embryo. Virtually all of the molecules essential for the changes in epithelial cell shape and position that drive dorsal closure are conserved and required for analogous vertebrate closure processes, including wound healing, and eyelid and neural tube fusion. Our ability to dissect and characterize dorsal closure in the experimentally tractable fruit fly enhances our understanding of the analogous processes in higher animals.

Our work has contributed significantly to our understanding of the JNK (Jun N-terminal kinase) and Dpp (Decapentaplegic) signaling cascades that function sequentially to direct dorsal closure. More recently, we have focused our studies on Raw (a novel protein) and Mummy (a UDP-N-acetylglucosamine pyrophosphorylase) and have identified a novel mechanism of JNK/AP-1 signaling antagonism. These studies are particularly significant as they allow us to find answers to unresolved questions of how the diverse JNK/AP-1 and Dpp pathway outputs translate into morphogenetic events (such as epithelial sheet movements) that are critical to the generation of tissues and organisms.

Currently there are no good treatments for ALD, and the precise mechanisms through which VLCFA concentrations cause ALD are still unknown. Moreover, what previous controversial mouse and fly models of disease ignore is the potential redundancy within the transporter and synthetase gene families that control VLCFA metabolism. Thus, to better understand the evolution and overlapping biochemical functions of the many VLCFA synthetases in flies and humans, we turned to double mutant studies in Drosophila. We have shown that the consequences of knocking out duplicated VLCFA synthetase genes (bubblegum and double bubble) are profound, and have thus generated the first powerful animal model for ALD. From the perspective of disease etiology and treatment, our data indicate that ALD is a disease of lipid and membrane-rich cells, and that accumulation of fatty acids does lead to cell death in affected areas of the brain. Currently, we are exploiting our model to (1) identify the mechanism of cell death in support cells of the nervous system, (2) identify other factors (genes) affecting VLCFA metabolism in the brains, and (3) screen for drugs effective in the treatment of this devastating disease.