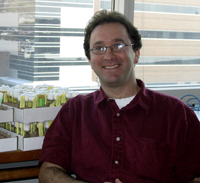 In my laboratory, we are interested in two biological processes:  cell morphogenesis and regulation of RNA stability.  To analyze these, we use Drosophila genetics and molecular biology, along with microscopy, cell biological and genomic approaches.

We are interested in the mechanisms by which cells form their shapes to build tissues and organs.  To address this question, we are studying the development of the Drosophila tracheal system, an interconnected network of epithelial tubes through which oxygen is delivered to internal tissues.  The branching and tubulogenesis processes in one tracheal cell type, terminal cells, are of particular interest.  These cells show considerable morphological complexity:  each cell forms dozens of fine subcellular branches by a process that involves cytoplasmic extension and bifurcation, and each branch forms an intracellular lumen through which air flows.  This complexity at the single cell level, combined with the genetic and molecular tools available in Drosophila, represent an excellent opportunity to ask and answer questions about cellular morphogenesis.

To address how the tracheal terminal cells form, we have previously carried out large scale genetic screens for mutants affecting terminal cell development.  We are now focusing on the molecular and cell biological functions of the genes defined by this screen.  For example, analysis of one of our mutants (out of gas) has suggested a novel role for a multivesicular body-like compartment in intracellular lumen formation.  Another gene, Zpr1, suggests a link between lumen formation and EGF signaling.  Finally, from our mutants we have identified a dual role for PAR-complex genes (par-6, aPKC, and bazooka) in lumen formation and branching.

To complement our genetic studies, we are carrying out a detailed ultrastructural studies of tracheal terminal cells.  We are developing novel electron microscope techniques to preserve membrane structure within terminal cells and to identify mutant cells in genetically mosaic animals.  Using these approaches, we will be able to better understand the membrane dynamics the occur to make the lumen, and be able characterize our mutants at the ultrastructural level.

The NMD pathway monitors mRNAs to identify transcripts that contain premature stop codons and to target these RNAs for rapid destruction.  We are using Drosophila genetics to identify the cis and trans acting factors that are used to identify such aberrant mRNAs.  We are carrying out large scale genetic screens to identify mutations affecting the NMD process and have now identified numerous such mutations.  Most of these are in genes known in other organisms to be required for NMD, while some are likely to define novel components of the pathway.  We are now carrying out genetic and molecular analysis of our identified alleles and extending our screens to cover the whole Drosophila genome.

We are also performing a transcriptome analysis of NMD mutant animals to identify the repertoire of endogenous target genes.  Bioinformatic characterization of these targets should reveal the set of cis-acting signals which direct mRNAs for degradation via the NMD pathway.  Additionally, the targets should reveal the tissue and cellular requirements for NMD in Drosophila development and physiology.