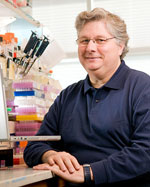 Research in our laboratory uses genomic approaches and technologies to understand the underlying biology of the genetic components of human disease. Projects include:

Our genome sequencing projects include mammalian genomic sequencing, SNP and mutation discovery by resequencing human genes, and microbial genome sequencing. Our laboratory has been a participant in the International Sequencing Consortia that recently completed the draft sequence of the mouse and rat genomes. As we build upon the foundation laid by the Human Genome Project, it’s become clear that comparing the human genome with those of other organisms is the most powerful tool available to understand the complex genomic components involved in human health and disease

Human illness is caused by many interrelated factors including aging, inherited genetic predispositions, and a variety environmental exposures. There is increasing awareness of the role that genetics plays as a factor in disease susceptibility. In some cases, a genetic factor influences disease susceptibility in a small fraction of the population because it occurs at a low frequency or involves a relatively low incidence disease; however, in other cases, a genetic factor increases susceptibility in a large number of individuals and involves a disease that occurs at high incidence, creating a large public health burden. As the human genome sequence neared completion in the late 1990s, it became clear that a complete genome sequence would be an important tool for understanding human health and disease, but the sequence alone would be insufficient to answer many questions about the genetic basis of disease. In particular, a comprehensive database of variation in the human genome is needed, to facilitate identification and characterization of highly penetrant Mendelian disease genes and less penetrant disease susceptibility loci. Our resequencing efforts focus on the discovery and annotation of single nucleotide polymorphisms (SNPs), the most common form of human genetic variation, in candidate disease genes. These sequencing projects include identification of DNA polymorphic sites, bioinformatics-based sequence analysis, validation of DNA sequence variants, comparative genomics, analysis of alternative splicing, and studies of gene-regulatory regions. Combined with comparative and gene expression analysis in the laboratory mouse, our genomic tools are opening new routes to increase our understanding of the genetic components of human disease.

Our sequencing technology is also used in the tracking down disease-causing mutations in a variety of genetically inherited muscular dystrophies, such Duchenne muscular dystrophy. Precise knowledge of the molecular defect in these diseases will improve early detection and screening, diagnosis, and eventually treatment and prevention.