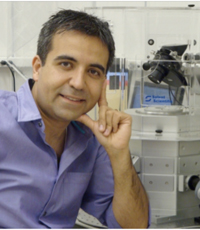 My lab is focused on development of microscopy techniques which will merge live imaging and high resolution microscopy, visualizing many of the essential molecular mechanisms critical for the function of retroviruses specifically HIV as well as negative strand RNA viruses specifically VSV. Our current microscopy focus is to extend capabilities of the iPALM microscopy for single molecule tracking and high resolution imaging of virological samples. We are especially keen in applying the fluctuations based methodologies as well as high resolution imaging to better understand transport and molecular mechanisms driving the biological mechanisms in VSV replication and HIV budding and maturation.

Our long-term goal is to gain a molecular understanding of the machinery that regulates the release of infectious HIV virions from infected cells. Newly released HIV virions are immature and non-infectious. The immature HIV lattice is composed of ~120 copies of Gag-Pol along with ~2000 copies of Gag. The immature virion incorporates the HIV protease as a monomer within the Gag-Pol precursor. During budding, HIV recruits members of the Endosomal Sorting Complexes Required for Transport to help catalyze its release from host cells. It is believed that sometime after release of virions, HIV protease monomers are released from the confines of the Gag-Pol proteins and form active protease dimers which in turn drive the transformation of the immature lattice to infectious mature HIV core. During the past couple of years, we evaluated the exact role of early Endosomal Sorting Complexes Required for Transport (ESCRT), ALIX and TSG101, in HIV budding. We found that these early ESCRTs play a major role in a molecular race between virion budding and activation of HIV protease which is essential for virion maturation and infectivity. Currently we are interested in understanding the exact molecular mechanism by which ESCRTs catalyze the release of HIV virions. We are also interested in understanding the molecular mechanism that drives the process of maturation specifically initiation of protease release from Gag-Pol molecules and the relation of these molecular events to virion release.

Negative strand non-segmented (NNS) RNA viruses include potent human and animal pathogens, e.g. Ebola, measles and vesicular stomatitis virus (VSV). To transcribe and replicate their genome, these viruses package multiple copies of an RNA dependent RNA polymerase (RdRP), within each virion. While the virion morphology varies among NNS RNA viruses, the basic mechanism of transcription and replication is shared. Specifically, the genome template in NNS RNA viruses consists of a single molecule of negative sense RNA, typically encoding more than 5 genes and fully encapsidated with the nucleoprotein N (N-RNA). RdRP polymerases transcribe the genome sequentially by initiating transcription at or near the 3' end and moving toward the 5' end. While the N-RNA bound with RdRPs is the deadly engine within many major human pathogens, it’s transcription mechanism is distinct from cellular DNA based RNA polymerases and remains poorly understood. We are focused on establishing a fundamental understanding of the RdRP transcription and open the door to its further applications. 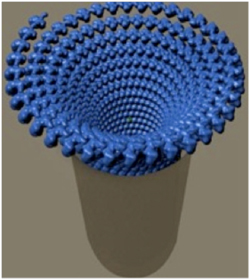 Artistic rendering of Vesicular Stomatitis Virus during RNA capture at the plasma membrane. For simplicity only the N molecule is shown. The illustrated packing within the virion is consistent with Cryo EM studies of VSV. The extended spiral outside the formed virion is an artistic expression. It is not clear for how long the RNA would retain its spiral twist in the cytoplasm.