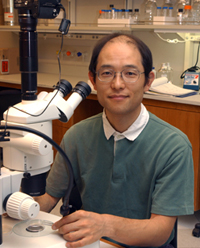 My fundamental interest is in vertebrate pattern formation: how vertebrates make up their complicated and organized body plan. Embryogenesis requires correct cell differentiation and positioning of tissues and organs in three dimensions. These two events are closely related to each other and are regulated with respect to each of the three body axes: anterior-posterior, dorso-ventral, and left-right (LR). Defects in LR axis information result in disorganized morphology and malpositioning of organs that disrupt their normal function. In humans, defects in LR asymmetric patterning commonly cause birth defects of the heart, lungs, gut and other asymmetric organs. LR asymmetric morphogenesis is regulated by LR axis information established during the early somite stages of development. The genetic cascade for establishing initial LR asymmetry has been identified over the last 10 years, but the subsequent steps by which LR information regulates asymmetric morphogenesis of internal organs is poorly understood. The goal of my research is to understand the genetic cascade critical for establishing LR asymmetries that is observed in the internal organs of vertebrates such as the heart, stomach and intestines.

Our current emphasis is on studying how LR asymmetry is established in the lateral plate mesoderm that is precursor of internal organs, and how the signals then regulate LR asymmetric morphogenesis in internal organs.

First, we are focusing on the roles of endoderm in establishing LR asymmetry. We have studied mouse Sox17 mutants that have specific initial defects in endoderm cells. This study has revealed that endoderm is important for establishing LR signals before Nodal expression in the lateral plate. We are analyzing molecular mechanisms by which LR asymmetry is regulated by the endoderm cell population.

Second, we are investigating how LR signals regulate asymmetric morphogenesis in heart looping. Cardiac cells derived from the left and right cardiac fields fuse to form a single heart tube and then the tube loops rightward. During heart tube formation and looping, cardiac cells differentiate to start beating. To understand basics of dynamic morphogenesis, we are examining cell behavior during heart tube formation and looping such as cell movement, cell proliferation and cell polarity in the chick system, which is an ideal model to observe heart development in vivo and in culture. Information derived from studies in chicks is used to understand heart looping in mammalian systems, such as the mouse with its valuable genetic tools.

Third, we are interested in intestinal asymmetric morphogenesis using mouse models of human intestine disorders such as malrotation with the same approach as above. Interestingly, intestines develop outside of embryos. The intestines then return into the body just before birth synchronizing with body-wall closure completion. If the timing of these two events is different, intestines are left outside of the body, which causes a congenital disease called omphalocele. Thus, we are also investigating body-wall closure morphogenesis as a model for human disease ompholocele. 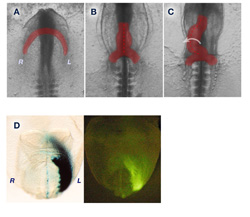 Legend: (A-C) Heart looping morphogenesis in the chick embryo. (A) Left and right cardiac myocytes starts to fuse at the anterior region at stage 8. (B) Fused linear heart tube just before looping at stage 10. (C) The heart tube is looping toward the right side at stage 11. (D) Left sided LacZ reporter expression driven by the asymmetric enhancer of Lefty2. Expression includes a region of the fusing heart in mouse embryos 8 days post coitum.