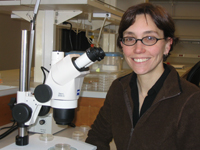 How do cells become motile? How do motile cells compete to migrate into a target tissue, or niche? How is polarity established and maintained in a migrating cell? We are interested in the molecular pathways and cellular processes that underlie the answers to these fundamental questions. For our studies, we are using a unique model: C. elegans sperm, which lack flagella and instead move by crawling, similar to many other cell types outside the reproductive system. We can directly observe cell movements in vivo, while using the genetic tools available for C. elegans to separately alter the genotype of migrating cells or their surrounding environment. For a worm to reproduce, their sperm must acquire motility, directionally migrate, and successfully compete with each other to fertilize oocytes; therefore, these processes provide powerful functional assays for motility and migration. Using this unique system, we are probing conserved mechanisms involved in cell division, differentiation, polarization, and migration. We have identified new roles in signaling for important protein families and new signaling pathways.

We have discovered a role for a t-SNARE protein, SYX-7, in asymmetric cell divisions. During cytokinesis, specific components are either segregated into spermatids or thrown away in a cellular “trash can” called a residual body. In the absence of SYX-7, cytokinesis initiates but ultimately fails, resulting in a single cell with 4 nuclei. We have found that this failure is associated with defects in the biogenesis of lysosome-related organelles, and we are probing the link between these LROs and how abscission is completed.

We have identified a signaling pathway that induces cell motility in response to an extracellular protease that signals via an SLC6-family protein. SLC6 proteins are transporters that have numerous roles in human physiology, but their function and mode of regulation outside the nervous system are poorly understood. We are using the genetic tools and cell biological assays available for our system to study the regulation and activity of this important protein family. In addition, our screens have obtained many new components of the pathway that activates motility, and we are currently identifying the genes involved.

We have also identified a protease inhibitor that prevents cells from becoming motile. We have recently discovered that, surprisingly, this inhibitory signal originates from muscle tissue and is then transported to the gonad where it functions. Furthermore, movement of proteins into and out of the gonad appears to be a broad phenomenon, suggesting that signaling between the germ line and soma could be more complex, and more direct, than previously appreciated.

We are using migration of crawling sperm toward oocytes as a model for studying how cell-cell interactions influence the abilities of individual cells to occupy a niche. We are using live imaging to analyze how different cell behaviors affect their localization. We have identified a gene, comp-1, whose function makes cells more competitive, and we are analyzing its mechanism of action. We have also found that migrating cells can influence each other, likely by inhibitory signals relayed through surrounding tissues. We are working to identify the specific signaling pathways involved in this inhibition. 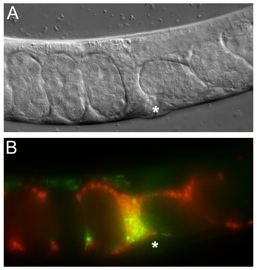 Sperm migration in C. elegans. Male sperm were transferred to a hermaphrodite and are migrating bidirectionally around embryos through the uterus towards oocytes (not shown). (A) DIC image. (B) Fluorescence image. Red, Mitotracker-labeled sperm; yellow, seminal fluid components marking the transfer site (*).